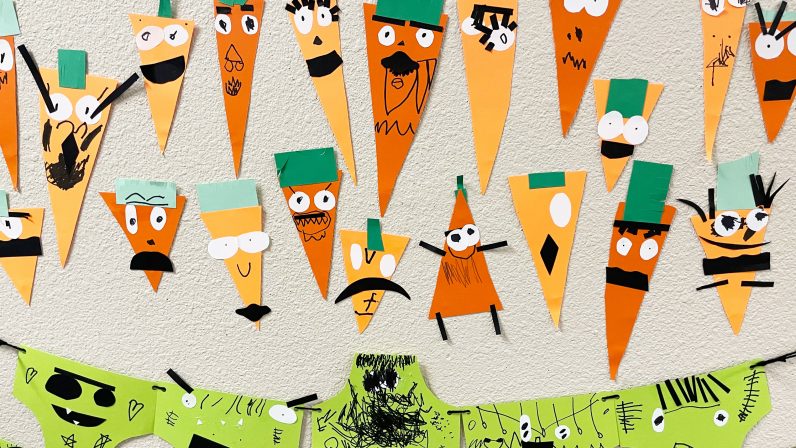 The hallway is a lively place this week.  Parent room reps from each class came in and decorated the doors.  A brew of ghosts and gooey stuff, pumpkins, candy corn, ghosts, creepy underwear, bats flying in front of a full moon, a giant spider, and green balloons are some of the decorations.  One class made an adorable collection of green-faced witches.  Another class drew silly monsters and wrote descriptions about them.  And then there are the creepy carrots and underwear, and all of the creepy characters that have followed.

Outside of the PreK room, you’ll see a delightful display of strange looking carrots and undies.  These were inspired by two books written by Aaron Reynolds: Creepy Carrots  and its sequel, Creepy Pair of Underwear.  Both books are quite appealing to young readers-to-be, as well as older students and adults.  In fact, several years ago the Mystery Theater Players (Seed staff) performed a stellar rendition of Creepy Carrots at the Seed Halloween Carnival.

This year’s PreK students used the creepy carrots and underwear stories as a springboard for their own stories.  Their stories included characters such as creepy unicorns, creepy oreos, a creepy jacket, creepy dragons and butterflies.  Here’s Kian’s story about creepy sharks:

On Friday, children will be wearing their costumes to school in lieu of our annual Halloween carnival.  For the second year in a row, we’re unable to have the carnival, due to the challenges of bringing large groups of people together at this time.   Although it’s disappointing for our community not to be able to have this event, we’ve learned to accept it for the time being.  Our recent tie-dye/tile painting day gave us a glimmer of hope that some day we can have our carnival again.  In the mean time, we’ll delight in the hallway decorations and characters that certainly contribute to the Halloween spirit around here.