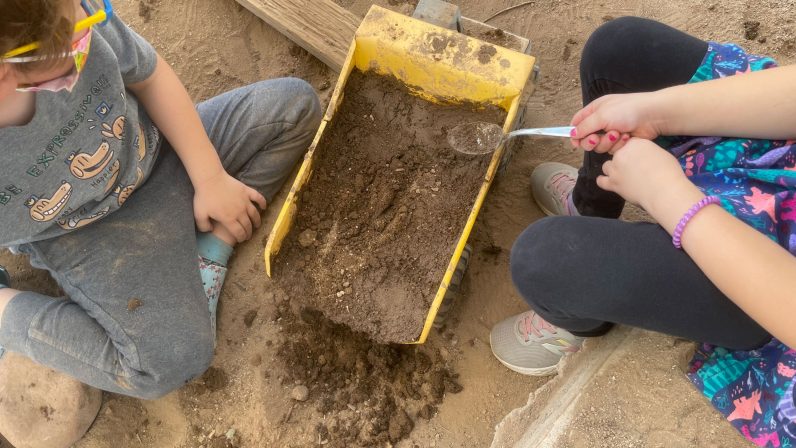 Occasionally I have the opportunity to leave my desk and spend time with a class.  This happened with the Prek children on Monday morning.  After a story and snack, we all headed to their outdoor classroom on a beautiful sunny day.  At first I watered the garden, simultaneously keeping an eye on the various activities going on.  Within a few minutes, children seemed to form small groups of two or three.  Some took longer than others to settle into their outdoor work, but eventually they all found something to engage themselves in with other children.  As all of this was going on, I noticed a small web on a trellis with a most intriguing spider hanging on for dear life.  After a bit of searching, we determined it was a triangulate cobweb spider.  Apparently they are harmless common spiders.  I kept my eye on the spider, in part to protect it from curious young investigators who had a hard time giving the spider space.  It remained there for awhile, then somehow disappeared while my attention was drawn elsewhere.

Meanwhile, hard work was happening all around the outdoor classroom.  One focused group remained together for at least a half hour.  They excavated mud from a single hole in the ground, transferring it to all sorts of pans.  Conversing constantly as they made “apple pie, pumpkin pie, and strawberry pie,” their dedication rivaled any bakery team I could imagine.

Another team created some sort of hotel in the dirt of a different area.  Their hotel housed, “a pig, twenty babies, toys, snacks and baby computers.” Magic powder (aka stirred up dusty dirt) was prolific with another group.  Two children staged muddy fights between a plastic manatee and a T-rex that was quite dramatic.

Amidst the more dramatic play, a final trio of children sat peacefully along the sidewalk at the edge of a sand and mud section.  The focal point of their work/play was a yellow Tonka truck.  With large mixing spoons they stirred and mixed mud with water, concentrating on creating just the right texture.  They packed the mud tightly into the truck bed.  One of the workers exclaimed, “The mud is wobbly!” Intrigued by his statement, I asked, “What makes it wobbly?”  The threesome offered several possibilities as I pointed out the different textures of mud in each part of the truck bed.  I kept asking questions.  Finally one of the girls shouted, “Water!”

Once again I marveled at the depth of learning that happens during play, and it’s generally the child-initiated play that holds the most potential for learning.  Their play is where they practice using language to communicate needs and respond to the needs of others.  It’s when they experiment and make sense of the world.  As teachers we are there to witness, ask questions, and assist in expanding the way they think and wonder about life around them.  In the process they teach us as much, if not more, than we teach them.