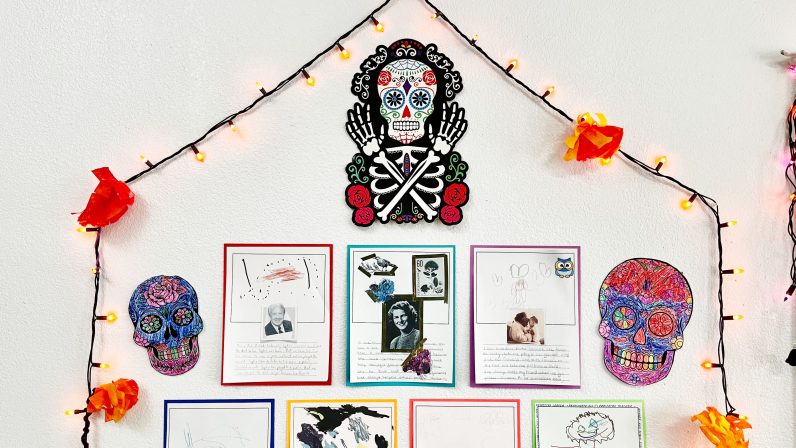 It’s the time of year when we start talking about the holidays, especially how to approach them in a developmentally appropriate, socially conscious way.  Actually, we’ve been in serious conversation about this for more than a year, according to my blog from a year ago.  For as long as I can remember, we’ve used The Anti-bias Curriculum as a guideline for decisions about how to engage in the holidays.  In the 1980s we shifted our all-school holiday program to a celebration of the winter solstice in an effort to take a more universal approach to the season.  Yet this year, as a staff we have felt a sense of urgency to be even more discerning about how we move into the holiday season as a school.  A beautiful example of what we’re aspiring towards was the recent día de los muertos celebration in the Preschool 4s.

In late October our lead teachers met to talk about our (tentative) upcoming all-school feast the day before Thanksgiving, as well as the Celebration of the Winter Solstice, also listed as tentative on our calendar.  We first discussed the all-school gathering the day before Thanksgiving.  After much discussion, we decided we weren’t quite ready to hold a large gathering, even though it would be outside.  Although our tie-dye/tile painting event had been a success, it was a much smaller, more regulated arrangement.  Out of extreme caution for our remaining population of students unvaccinated for Covid, in the end we decided to have the classes gather for an outdoor picnic (eating their own lunches) in three groups according to their scheduled recess time.  Hopefully, next year parents will once again be able to participate in this significant event.

The conversation then shifted to our traditional Celebration of the Winter Solstice.  Typically, this event occurs in a location remote from the Seed (in the past few years it’s been held in the South Mountain High School auditorium).  Each class spends the month of December rehearsing a dance, which is performed on a stage.  It’s an incredible amount of work and is a magical Seed evening.  With a large inside event out of the question, we explored alternatives.  As often happens, one teacher threw out an idea, others expanded upon it, and all of a sudden, a brilliant new option emerged.  In the coming weeks, a committee will begin working on it, and the entire staff will be involved.  That’s all I’m going to say at this point, and we’re all enthusiastic about what is about to manifest.

Along with talking about the two events, we’ve also been in conversation about the upcoming holiday season and how to refine the ways we navigate it, honoring our entire community.  Using “Holidays and Anti-bias Education: Being Thoughtful and Creative” by Julie Olsen Edward and Louise Derman-Sparks as a starting point, we dipped into grade level dialogue.  We are in the process of creating an official all-school holiday policy based on anti-bias educational goals.  The goals will include practices that enhance each child’s self-awareness, develop children’s sense of appreciation for human diversity and recognize unfairness, and support children as they learn to use their voices in the face of prejudice and discrimination.  As always, it’s a work in progress.  It’s part of our commitment to making this world a more just, and equitable world for all.