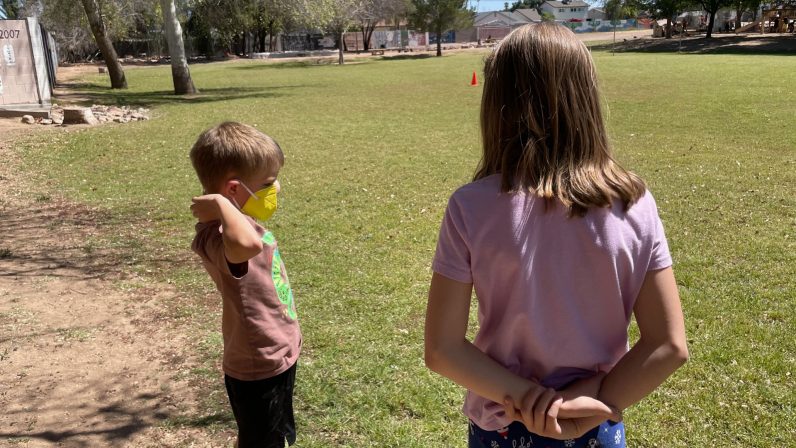 Earlier this week I was covering a playground shift and noticed a kindergarten student exploring the outer edges of our outdoor space.  I wandered over and decided to engage him in conversation about the cool shirt he was wearing.  It was brown with a bright green snake on it.  I asked him if he liked snakes, and he lit up saying, “I do!”  Boa constrictors soon became part of the conversation.  We talked a bit more, then I noticed one of the fourth grade girls nearby whom I happened to know has a pet snake.  I asked if he knew her.  He didn’t, so I brought him over, introduced the two of them, and asked  her to tell him about her snake.  She perked up and began describing her ball python.  I eavesdropped on their conversation as best as I could, given that I was on duty AND trying to take notes on what they were saying.   One would start to wander away from the other, only to be followed to a new location to keep their conversation going.  Here are a few snippets from their exchange:

“Some cobras spit venom on people.”
“When a snake bites it will hurt when it pierces the skin.”
“Once I was in this place where there were garter snakes.  I felt very strong after I caught a snake.”
“There’s a snake with a horn that exists in real life.”
“Some snakes eat things bigger than their heads.  They eat quail eggs.  That is true.”
“I’m going to start a show where snakes are the star of the show.”

I was astounded by the content of their conversation, as well as its length, given it was between a kindergartener and a fourth grader.  It was their passion for snakes, and the excitement of sharing it with a friend, that held it together.

A day later I was again educated by a young child.  I was invited to listen in on a Preschool 4’s presentation on scorpions.  She was engaging and certainly knew how to hold her audience’s attention.  From her I learned that scorpions are actually arachnids, not insects as I’ve mistakenly believed for my entire life.  She explained, of course, that it’s because they have eight legs.  Then she added, “Even though octopuses have eight legs, the aren’t arachnids.  Isn’t that cool?”  During her Q&A session, someone asked about the best way to see scorpions, and she replied, “Not too close!”

One of her classmates shared that they had 100 scorpions at their house.  The scorpion expert exclaimed, “How did you handle them all?”  A bit later when taking questions from her Zoom audience, she reminded participants, “If you have a question, be sure to take yourself off of mute!”  As I reflected on both experiences, the snake conversation and the scorpion presentation, I was humbled by the depth and ownership of their information.  Both instances were strong examples of what happens when children are able to pursue interests, then given the environment, opportunity, and technology to share it with the world.