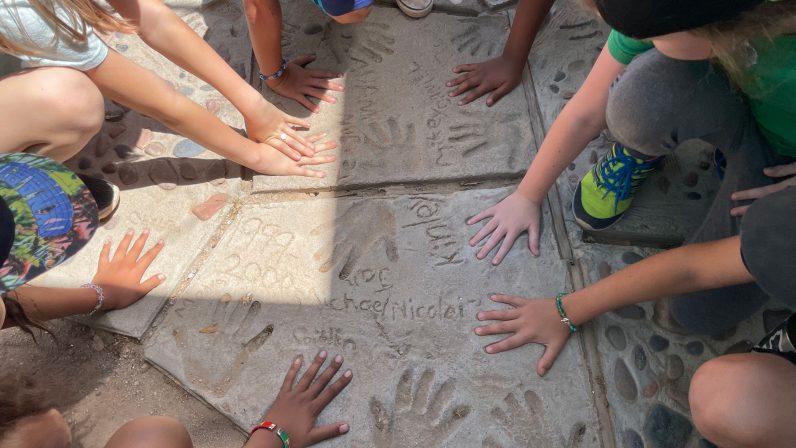 I first started teaching 4th/5th grade in 1999, the year we moved into our present building.  Many students that year were kids I had as 2nd graders, so we were already well established.  As we settled into our new permanent location, we slowly created functional outdoor features.  One of our first projects was a small patio outside the classroom door.  I’d never worked in concrete before, so it took us a few sections before we got the mixture right.  On the outer sections, each student made a handprint in the concrete and added their name.  Those students are now in their early 30s.  Surprisingly, the patio is still intact despite decades of usage.

For most of this week I was with the 3rd/4th graders, helping them navigate story problems in math, teaching them about linking verbs and helping verbs, determining daily assigned spots for snack and lunch, and guiding them through a simple art project that ended up in a white frame for next week’s silent art auction.  Each child worked on a poster for their passion project, which took up considerable space, both in the schedule and the room.  I made a concerted effort to allow time for this work, as it involved much more than making a poster.  Children helped each other find photos, color backgrounds, and troubleshoot technology issues.  When one girl figured out how to change the size of an image and print it, she became the go-to resource for others who wanted to do the same.  Their ideas for presenting content evolved over several days, as they looked at each other’s work that then inspired their own.  The support they gave each other freed me up to help students.

Having time with the class at this point in the year brought back so many memories of groups I had in the final years of my classroom teaching.  I loved being their last teacher at the Seed, impressing their minds with many of the intangibles that I believed would serve their future lives.  Throughout the week I saw evidence of empathy, compassion, communication skills, thoughtfulness, and commitment to making our world a better place by being an engaged global citizen.  I witnessed qualities that our entire staff has cultivated in these children over many years.

As we finished up snack outside yesterday, I noticed a few children gathered along the perimeter of the patio we constructed over 20 years ago.  Several students were placing their hands in the prints imbedded in concrete, testing out which prints matched the size of their own hands.  They all managed to find a handprint that fit.  Seeing their hands resting on the imprint of a child who had come before seemed symbolic.  It’s as if they were absorbing the essence of a former Seed who has since grown up and made their contribution to the world.  Additionally, it was a moment of leaving their own imprint upon the foundation formed by previous generations, adding themselves and their individual experiences to the greater Seed history.  In a way it was also their way of saying, “We can do this.  We’re ready to step into the world and see what we can become.”