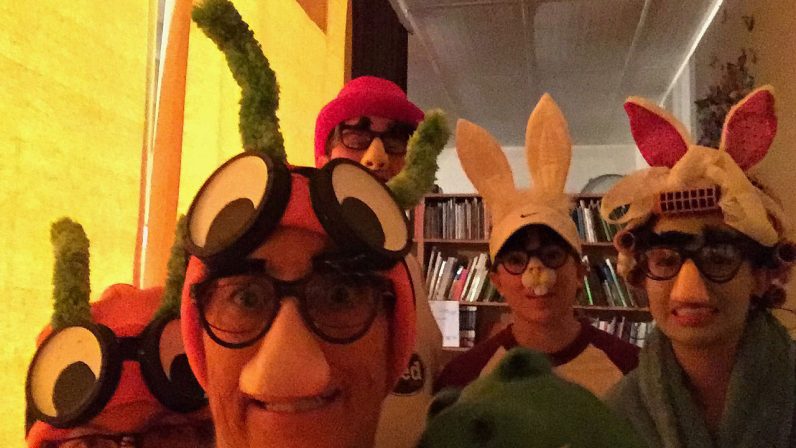 Hanging Out with the Monsters

When the carnival starts next Friday night, you won’t see me right away.  I’ll be hanging out backstage with the monsters.  You see, for the past 31 years, I’ve been one of the Mystery Theater players.  We’re a dedicated band of hooligans (also Seed staff members) who enjoy making people laugh.   The Mystery Theater has been drawing carnival crowds since 1986, the only year I was NOT among the players.  The cast rehearses during the weeks leading up to the carnival, usually developing a script from a children’s book.  It’s an act of love and…well, hilarity, as we come up with new ways of sharing a bit of Seed humor.  Some years we’ve had over a dozen players (e.g. the year we did “Snow Whine and the Seven Dorks”), and others, such as this year, where we have a small but mighty group of six.

This year’s performance is based on Amanda Noll’s book, I Need My Monster.  It’s about a young boy who encounters several friendly monsters, sent his way to keep him in bed at night so he won’t get into mischief.  It’s appropriate for even the youngest Seeds, as well as older students and parents.  Many students are already familiar with the story, since they’ve read it in class.  As always, there’s a bit of school humor interspersed throughout the show, along with wacky costumes, unique characters, and a dance number at the end. The night of the carnival we offer three shows, at 6, 6:30, and 7 PM.

All proceeds from the Mystery Theater go to the Seed faculty retirement fund.  Your attendance at a show will directly support your child’s teachers.  Tickets are on sale for $5 now through the night of the carnival.   The Mystery Theater is a highlight of the carnival for many of our attendees, and some of our alumni families return year after year, just to see the play (and old friends, of course).  Don’t miss this opportunity to see a slightly different side of the Seed staff AND support them at the same time.  If you would like to read more about the Mystery Theater, check out these links from previous years: