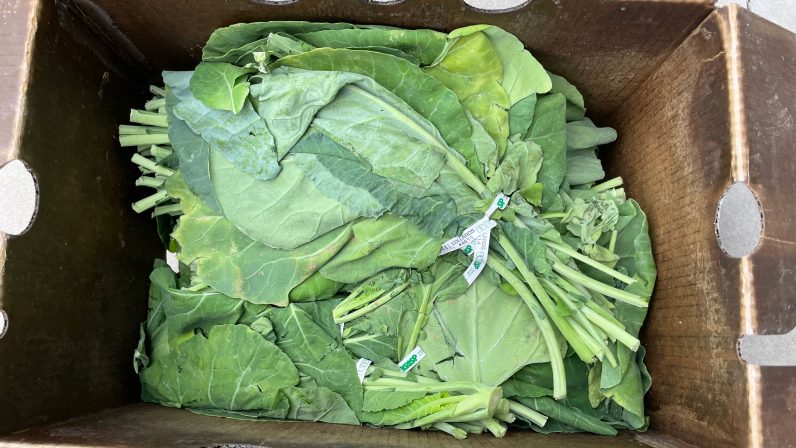 Last Friday the Seed was inundated with collard greens.  Cases of greens arrived along with bags of ingredients to prepare the greens for eating.  The collard greens were part of a program called The Blue Watermelon Project.  Their website describes the project in this way:  “Inspired and led by the efforts of Chef Charleen Badman of FnB Restaurant, Blue Watermelon Project is a grassroots group of chefs, restaurateurs, farmers, and community food advocates that believe in good food, equal and fair access to it, and that a systemic food systems change starts from the ground up.”

There were enough kits for me to be able to take one home.  On Monday night, for the first time, I cooked and ate collard greens.  This was somewhat surprising, given that I’ve been a devoted cruciferous eater for the past ten years.  As part of my recovery from breast cancer, I discovered the nutritional benefits of the curciferous family through The Cancer-Fighting Kitchen. Although I’d heard of collard greens, I’d never cooked or eaten them.

Collard greens played an important role in the lives of Africans who were enslaved and first brought to America.  They were a staple food during times when other foods were denied.   As I’ve learned more about collard greens and the important history of Black farmers in America, a remarkable practice has come to my attention.  In “Black to the Land,” a chapter in a most extraordinary book called We Are Each Other’s Harvest, I read about ancestral women who braided seeds into their hair so they could transport the seeds safely across the Middle Passage.  Those seeds eventually became the foundation of significant agricultural systems throughout the New World.  I had no idea how monumental the contributions of African farmers and “seed carriers” were to the food system upon which we depend today.

I keep thinking about the wise and resourceful women who had the foresight to hide and carry seeds with them as they were transported into a deeply uncertain  future.  Naima Penniman’s poem, “A Love Letter to Future Generations,” refers to this act as a “love note to future generations.”  In addition to original seed transporters, I find this to be a strong metaphor for the work we do here at the Seed.  We, too, are carrierers and planters of seeds, holding intentions that they will bear fruit in healing ways for our present and future planet.

(excerpt from “A Love Letter to Future Generations” by Naima Penniman)